Brendan Ogle: On Friday we go to the polls in local and European elections, and Unite members do so on the back of an exciting and radical 2019 Irish Policy Conference last week. In addition to two exciting new initiatives in the areas of mental health awareness and a community-based sporting initiative, the Conference was packed with motions about workers’ issues, equality issues and a political alternative.

It would be dishonest to pretend that the non-emergence of an electable progressive Government in the Republic following a decade of brutal austerity is not beyond disappointing. One would have expected that the nationalisation of billions of Euro of private banking debt, running down of our public services, the health disasters and the ideologically created and maintained housing emergency battering the working class would have led to some ‘class unity’ politically, and a coming together of a real ‘left’ at last. And if that isn’t enough to bring us together, does the onset of far-right intolerance and hate speech not require a unified response?

Unfortunately however, it seems we are as far away from Ireland’s first left government as we ever were.

In Unite, however, small steps are being taken, and through Unite in the Community we now have a dedicated branch – the Tom Stokes Branch – aiming to continue to pursue the ten Right2Change policy principles. From your Right2Water to your Right2Jobs & Decent Work, or your Right2Sustainable Environment, these policy principles hold within them the ethos and direction for any progressive Government seeking to make Ireland a better country for everyone.

And so, next Friday, a total of 16 Unite members, 15 of whom are in this specific Branch, are seeking your support in the local elections. These independents are mostly first-time candidates running and funding their own campaigns in your communities, with five incumbent Councillors added. They are:

The Tom Stokes Branch of Unite Community was only formed in January 2019. Tom Stokes himself was a key founder of the idea, and worked on the concept of creating a vehicle to deliver the ten policy principles until he became unwell last year. Tom was a republican in the broadest meaning of that word, and in his life he gave expression to the concepts of Equality, Democracy and Justice in everything he said and did. Tom was also an absolute feminist and advocate of gender and sexual equality, and he was so pleased by the result of the Repeal Referendum a year ago. He wanted to see a new, confident and left alternative emerging.

This coming Friday, those of you with votes in these 16 constituencies have an opportunity to vote for people who are truly and personally committed to delivering an alternative to this broken, unequal and grossly unfair state. Please do so.

Once this election is over the Tom Stokes Branch will be considering the next steps in building the unity needed. It’s not good enough to want change. We need to be prepared to change ourselves, and how we think politically in Ireland, to deliver it. Why not get involved?

Below are your 16 Unite Community candidates. 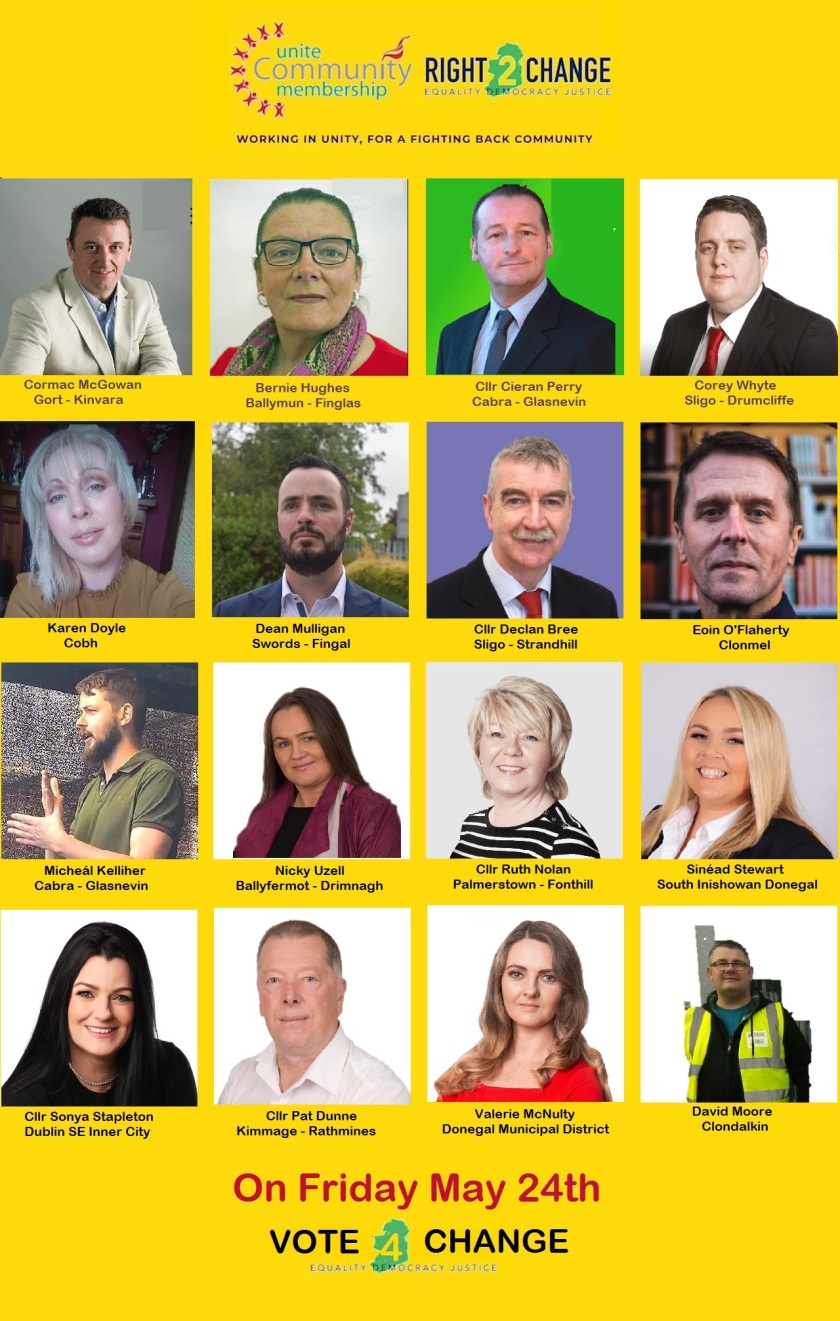